Viridis Ag, the latest agriculture-focused venture launched by Macquarie, has purchased its first Australian farm in a deal rumored to be valued at A$32 million (US$25 million).

The first property to be included in the Viridis Ag portfolio is The Grange, located in Western Australia. Previously owned and sold by Wellard CEO Mauro Balzarini, the 16,500-hectare property had been operated as a livestock operation. Under Viridis Ag’s new ownership, however, the property will be converted to a cropping operation, in fitting with the company’s goal of building a diverse portfolio of agricultural properties that integrate the latest precision ag technologies into their production methods, which span a range of geographic regions, and climates, as well as serve a variety of markets.

“This was the first farm for Viridis Ag, and it’s in line with our broad strategy to have a significant and diversified row-crop farming investment, dryland as well as irrigated,” Sean O’Reilly, division director of Macquarie Infrastructure and Real Assets and head of Crop Australia, told Grain Central.

Since Viridis Ag is currently raising funds, U.S. Securities and Exchange Commission regulations prevent much release of information about the venture. It is however known that the company’s board includes three directors from Lawson Grains, including O’Reilly, and Michael Carroll, former chief of NAB Agribusiness. The life of Viridis’ investments could range anywhere from 10 to 15 years to an evergreen structure.

Grain Central reports that Lawson owns and operates a portfolio of 10 diverse cropping properties stretching across New South Wales and Western Australia; an achievement that Viridis Ag is looking to replicate through properties producing wheat, canola, barley, lupins, chickpeas, and summer crops. In addition, a feature consistent to all Viridis properties would be a dedication to engaging with research initiatives and the inclusion of sustainable practices including soil amelioration and precision ag.

Although information about Viridis Ag is restricted, The Australian Financial Review recently reported that the Clean Energy Finance Corporation (CEFC) made its first equity investment into the agriculture sector, investing $100 million in a fund launched by Macquarie that will have a focus on precision farming, and which will eventually include on-site teams supported by Viridis Ag.

Although the CEFC has provided $800 million in debt facilities in the agriculture sector, this investment, which was included in the first round of funding raised by the unnamed fund, is the first direct investment in ag for the financing body focused on green investments.

“The opportunity was presented to us where we could invest in a fund and drive some behavioral changes,” CEFC CEO Ian Learmounth told AFR. “It’s about improving farming efficiency and standards, reducing emissions around agriculture, particularly in cropping.”

Lynda Kiernan is Editor with GAI Media and daily contributor to GAI News. 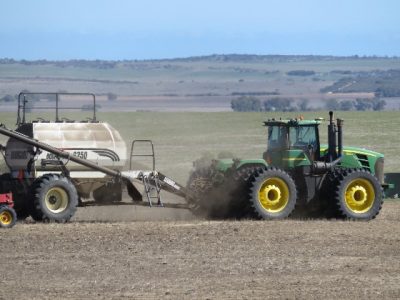 Macquarie’s Viridis Ag has kicked off its investment portfolio by purchasing The Grange at Dongara, south of Geraldton in Western Australia.

Macquarie’s property arm has won a $100 million investment from the Clean Energy Finance Corporation as it invests in a new agricultural fund based on precision farming techniques.

The new fund, which could be worth as much as $1 billion when it is fully invested, is based on a portfolio of diversified cropping properties.

Managed by Macquarie Infrastructure and Real Assets, the new vehicle has been seeded already and has closed its first round of investment, including the contribution from the CEFC.

So far it holds about 500 hectares of permanent cropping assets – for crops such as avocado – and 15,000 hectares of dry land assets for grain crops, including wheat.

The CEFC is already a well-known player in the commercial real estate sector, funding green building landmarks such as the new WorkSafe headquarters in Geelong. Last year it injected a $100 million investment into the AMP Capital Wholesale Office Property Fund.

As well, the federal green funding body already has some exposure into agriculture, providing about $800 million in debt facilities, of which $200 million is drawn.

However, the tie-up with Macquarie is significant because it is the CEFC’s first move into equity in the sector.

The CEFC’s overall portfolio is delivering about a 4.5 per cent return. About 85 per cent of its exposure is debt.

The decision to take equity in the new Macquarie fund was partly opportunistic, Mr Learmonth said. “The opportunity was presented to us where we could invest in a fund and drive some behavioural change.”

Such techniques can maximise yields and pay off in energy efficiency and reduced carbon emissions.

MIRA’s head of agriculture is Elizabeth O’Leary, who said the precision farming techniques would achieve environmental savings, while maximising soil health and productivity.

“We have been managing a significant portfolio of farmland in Australia for more than a decade and look forward to bringing our expertise and experience across a range of production environments to further energy efficiency and sustainability practices in the sector.”

A key element of the funding entails a three-way effort between Macquarie, the CEFC and the CSIRO to establish a series of on-farm standards in energy efficiency and emissions reduction that can be taken up more broadly across the sector.

The Macquarie assets will cover seven different climatic production zones, giving relevance and legitimacy to any standards that are developed.

“We hope it may well be adopted in the same way the real estate sector has the Green Star rating system,” Mr Learmonth said.

As the fund’s portfolio grows, MIRA will set up a series of on-farm teams supported by a new business, Viridis Ag, based in Albury, NSW.